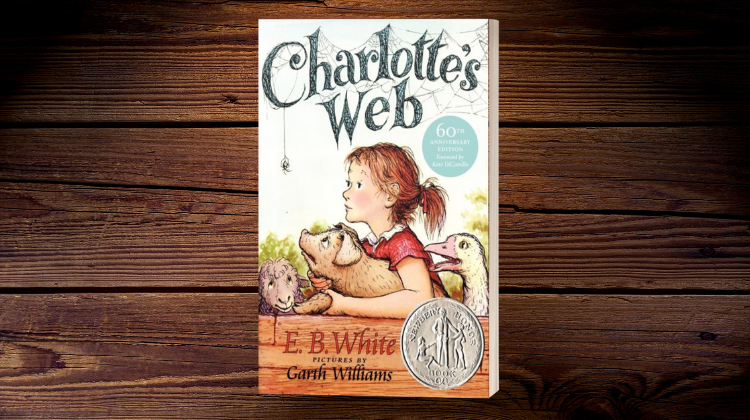 Do you remember the first book you read that swept you away?

When I was about six, my older sister read aloud to me a story of a runty pig and his friend, Charlotte. Each night she’d read a chapter and ask, “Do you know who Charlotte is?” For some reason I didn’t get she was a spider until we were almost halfway through the book. But I remember being enthralled.

I read Charlotte’s Web at least twice a year during my childhood. And I cried at the end every time. I think I was hoping the story might end differently one of those times—that Charlotte would (spoiler alert!) not die. But that book filled me with such joy and sorrow and inexplicable longing that I wanted to relive the experience over and over.

Charlotte birthed in me a lifelong passion for stories of fantasy, friendship, unlikely heroes, and sacrificial love: Bless the Beasts and Children; The Lord of the Rings; The Lion, the Witch and the Wardrobe; and The Black Stallion series, to name just a few. Helping to write The Prince Warriors series brought that passion full circle; I got to be a part of creating the kind of stories I love to read.

We humans are hard-wired for story. We want to be fully immersed, to inhabit the skin of the characters, feel their emotions, think their thoughts. We want to unravel mysteries, discover new truth, and see the world through different eyes. It’s no wonder that Jesus Himself taught using made-up stories about ordinary people. I can imagine the crowds gathered around Jesus as He told the story of the two sons, hanging on every word and then gasping at the cliffhanger ending. What happened? Did the older son go into the party or not? Jesus always left them wanting more.

We urge our children to read, because we know it’s good for them. Yet as we grow older, we read less. Studies show a quarter of adults and one third of teenagers in America haven’t read a single book for pleasure in a year. Library use is in decline. Perhaps it’s the lure of electronics: Netflix, YouTube, TV, video games, social media—adults, as well as kids, are more likely to pick up a device in their spare time.

Yet no matter what the format, our basic craving is for stories. Tell me you haven’t sat in church during a sermon when your mind started to wander…until the pastor launched into a story, and your brain snapped to attention. (Or am I the only one?) Stories—both made up and true—can give us a context for living, a moral compass; they help us make sense of and cope with the world.

Most of the greatest stories we know originate in the Bible: underdogs defeating evil foes (David and Goliath), oppressed people finding freedom (Exodus), powerless woman saving the world (Esther), girl meeting boy in a sweet romance (Ruth and Boaz). Perhaps the greatest and most enduring is the one played out by Jesus: the hero giving up His life for His friends. We’ve seen that story retold countless times in the most unlikely of places, including Harry Potter. I’m always grateful when someone tells me that a certain scene in one of my novels has helped them in some area of their lives. It’s the reason I started writing in the first place—to give others what had been given to me through books.

Still, making a habit of reading can be a struggle, especially if you’ve not done it in a while. Try this: instead of turning on the TV or a device, pick up that book on your shelf (or open the one on your Kindle) you still haven’t read, settle into a cozy chair with a cup of tea, and commit to reading for the amount of time it would take you to watch an episode of This Is Us: forty-five minutes. Or maybe go to bed a little earlier so you can read a chapter or two before you fall asleep. You might just get swept away.

Gina Detwiler was planning to be a teacher but switched to writing so she wouldn’t have to get up so early in the morning. She is the co-author of The Prince Warriors books with Priscilla Shirer and is currently working on the Ultimate Bible Character Guide.  She has also written the  Forlorn series, which deals with the subject of spiritual battle for older teens.

When asked what book has most impacted her life, Gina replies, "Besides Charlotte’s Web? I’d have to say the Bible. I didn’t read it until I was an adult, and it truly blew my mind. Who knew all those fantastic stories were in the Bible? Difficult stories, too—stories that made me question, ponder, go much deeper in my faith. Many dismiss the Bible because it’s too hard to understand or archaic or boring or irrelevant to their lives. Nothing could be further from the truth. The Bible is not an easy book, to be sure, but it is, indeed, a good book, the Good Book."