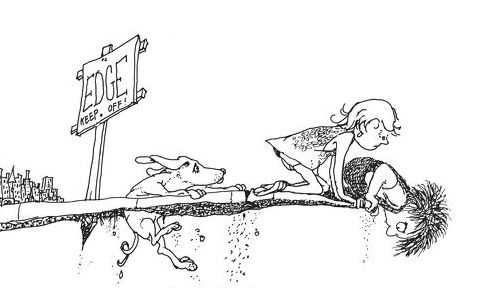 There are no light reads.

There are not a lot of memories from fifth grade I can recall with any clarity. This was thirty-seven years ago and without my yearbook, I would not be able to tell you who all was in my homeroom or who I had as my homeroom teacher. You’re just barely double digits in fifth grade. And mostly I just wanted to play sports, figure out girls, and play with my G.I. Joe toys. I do remember my grades were terrible. I cannot remember which year it happened, but once my parents took me out to Quincy’s to celebrate a C in math. Could have been any grade through twelfth, really. School was not a happy place for me. Sick at home was my happy place.

But I do have one memory I will not forget. For some reason my fellow fifth graders and I had to go to the “accelerated” wing of the school for what is now called “Language Arts.” The school was a magnet school so we were maybe all a little set apart but that side of the school was for the really, really smart kids. I can remember looking at the eighth grade kids like they were sophisticated adults headed for college. Or med school.

Our teacher was Mrs. Derieux (Dare-e-oh), and the worst part about the whole deal was she had the lone distinction of knowing my parents. You see, I was the fourth of four boys and my closest brother in age was nine years older than me. My parents were done. I remember the glorious safety of knowing my parents were never going to show up for an open house and meet my teacher and look over my work. Never happened. They were done. Don’t get me wrong; they were loving and generous. But they were not going to get involved in my school life unless a teacher’s conference was called.

But for some reason my parents knew Mrs. Derieux. My brothers knew her kids, too. Once we saw them at a water park in Panama City Beach, and it was the weirdest moment of my summer.

Fifth grade was the beginning of me losing some shyness. Unfortunately, you do not shed that skin in a pretty way. Up until that year, I was pretty quiet in class and was never close to being the class clown. But for some reason, in fifth grade something changed.

One day Mrs. Derieux announced to the class that each of us was going to have to choose a poem and then either recite or read (cannot remember which) that poem to the class.

Let me back up. I had no subject. You know how most kids, even by fifth grade have a subject they “get”? I did not have that subject. There was no subject I gravitated toward outside of baseball and football and cartoons.

Back to the poetry assignment…

“Poetry is for girls!”

You know that feeling you get when you look in the rearview mirror and see the cops right behind you with the lights on? That was the feeling rushing up the back of my neck. I thought I was going to see the principal, Mr. Simmons. Not only did he never smile, but this was 1981, so he had multiple paddles hanging ceremoniously in his office. All of them looked worn and used. 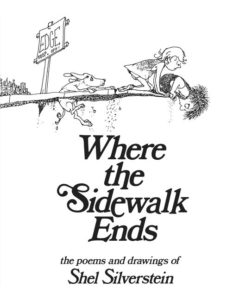 Mrs. Derieux came out in the hall and gave me a look. But she didn’t get mad, which is most likely why I remember this moment so vividly. She explained to me that poetry was not just for girls. And then she gave me a book. It was a poetry book. But it didn’t look like a poetry book. It had a cartoon drawing on the front and was called, Where the Sidewalk Ends.

Hard as I try, I cannot remember what poem I chose. I wish I could. But that was the beginning of a lifetime of loving poetry and reading and words.

To this day, I carry poems around in a pocket of memories like precious jewels. Sometimes I just carry poetry books around.

I can draw a straight line with a starting point deep in that book of children’s poems, and it will run through the heart of a seventh grade boy writing funny poems for his friends. It can be traced through the dozen or so notebooks filled by a gangly high schooler, who all at once secretly relished the loneliness of poetry and struggled to curb his enthusiasm in class for Chaucer and Shakespeare and Frost. That line shoots like an arrow through a college student who was moved by Heaney and Dickinson. And that line goes straight on into a life of writing and study.

That book by Shel Silverstein—which sits with all my other poetry books—is why from an early age I loved to string words together into something meaningful. This is why I say, “there are no light reads.” Even a book of silly children’s poems can change your world.

Which book has unexpectedly influenced your life?

Matt Redmond is a full-time theology teacher to eighth through tenth graders, a part-time pastor, and sometimes writer. He lives in his beloved hometown of Birmingham, AL with his wife, Bethany and their three children, Emma, Knox, and Dylan. He was probably listening to Bach or Billie Holiday while writing this. The book that has most influenced his life was Where the Sidewalk Ends.