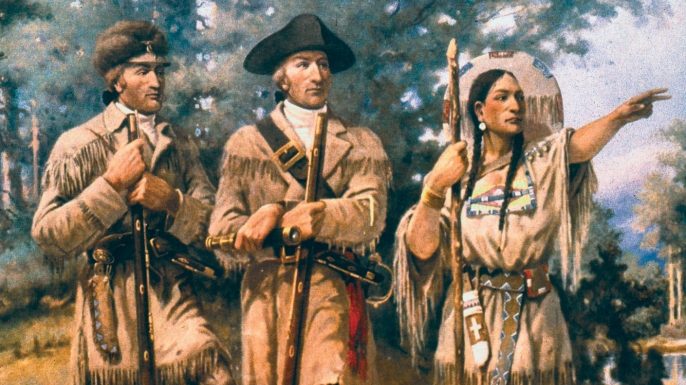 After I graduated from college and traveled for many months, I finally recognized that for once in life, I wasn’t being told what to read. At a friend’s house, I saw an interesting book on the shelf. It was Undaunted Courage by Stephen Ambrose. This is the grand narrative of Lewis and Clark, their commission from President Thomas Jefferson, and their triumphant quest to reach a passage to the Pacific Ocean. My imagination ran wild while reading it and it reminded me of why I loved history. More clearly, it reminded me about why I loved learning about great lives like Lewis and Clark.

I’ve discovered in life that one of the best ways to learn is by studying the actions of great people throughout history. By reading stories about great lives, we learn a lot that is often surprising and overlooked in the bullet points of history class. Here are five things we learn by reading stories from extraordinary people from the past.

It is easy to look at leaders as perfect heroes. Upon further examination, they are flawed just like us. During the height of the Civil War, General Ulysses S. Grant moved from being an unknown western leader to establishing himself as the fighter we know today. In Ron Chernow’s new biography, Grant, you get a picture of a person that is probably not much unlike you or me.

Some of what is great about Grant is Ron Chernow’s excellent research and storytelling. Some of it is just the fact that Grant is a great American that also possesses great flaws. That is what makes him so much more relatable to other major leaders in U.S. history. He grew up with very little yet struggled and struggled. Juxtaposed with the aristocracy and monarchy of Europe, Grant was a true working American man of the people. He was a champion for those who couldn’t fight for themselves, most notably during the Civil War and Reconstruction.

What makes a man or a woman? What makes them rise up to face challenges? What ultimately is inside him or her? What are their fears? What do they believe that drives them? These are the great questions that showcase the faith, doubt, and vulnerability of a great life.

Read about the faith and beautiful service of Mother Teresa in Calcutta, India. Perhaps it will inspire you too to serve the poor.

Read about the deep conviction and faith that William Wilberforce had to stay the course over many decades as he dedicated himself to ending the slave trade in the Britain Empire as well as eventually abolishing it. Perhaps you too will stand up for those who cannot stand up for themselves.

Read about Elisabeth Elliot and her ability to move on in a life of faith and service despite losing her fellow missionary husband after he was killed in South America. Perhaps you will be so brave to go into the mission field too.

Read about Louis Zamperini, Olympic runner and World War II POW survivor, and his little known story of coming to know Jesus at a Billy Graham Crusade and how it ultimately saved his marriage. Perhaps you too will fall to your knees as he did to admit what you need most is Jesus.

Read about the great fathers of our faith, Augustine, Charles H. Spurgeon, Dietrich Bonhoeffer, C.S. Lewis, and Martin Luther. In each of these lives you will find flawed human beings who clung to Jesus. They all experienced doubts and all ultimately looked toward Christ for comfort.

For those of you who have watched the Emmy-award winning HBO miniseries, Band of Brothers, or read the book of the same name by Stephen Ambrose, you know Major Winters. His life has been well documented to this point through that story as well as through his memoir, Beyond Band of Brothers.

Following the publication of Beyond Band of Brothers, Conversations was a book Major Winters wanted to have written after spending hundreds of hours with Col. Cole Kingseed. There were lessons from Major Winters’ life that needed to be told.

What I appreciate most is what I learned about leadership from him. Here are ten points he shares for any leader:

Most people know Winston Churchill by his magnanimous speeches with his deep and brogue British accent, his cigar in hand as he walked, and the way he led the United Kingdom with the Allies to victory in World War II. He is one of the most quotable people of all time and books continue to be written about him. I suppose more will continue to be written for years to come.

What most people do not know is that Winston Churchill was considered an incredible failure by the age of 40. He also suffered from depression throughout most of his life.

During the First World War, Churchill was First Lord of the Admiralty and the chief proponent of the invasion of Turkey now known as the Gallipoli campaign. His strategy was to create a southern link to Russia, their ally. The Turks, a skillful and determined enemy, repelled the allies, and the campaign cost the lives of many young Australians and New Zealanders (ANZAC troops). Perhaps not solely responsible for the tactical defeat on the ground, the campaign was nevertheless Churchill’s idea and it crippled him politically for over twenty years.

Churchill was a big, fat, failure.

We now know the rest of the story, as it didn’t end there.

Despite being cast into a political wilderness, he dug in his heels and and marched back to eventually become Prime Minister during World War II.

It’s easy to canonize Winston Churchill because of his successes. But, pay closer attention to his failures that made him who we know today.

There were times in life when I quit. There were also times when I stuck it out and finished whichever work project, college class, or round of golf, despite the fact that what I was doing wasn’t going well. There is not a day when I don’t thank God that I just stayed in the fight and even though I didn’t win, I still finished.

That memory came flooding back after reading the book, Endurance by Alfred Lansing. In it, Lansing tells the epic tale of Ernest Shackleton and his attempt to reach the South Pole and make it across the continent in 1914 on the eve of World War I. As the book shares, “In January 1915, after battling its way through a thousand miles of pack ice and only a day’s sail short of its destination, the Endurance became locked in an island of ice. Thus began the legendary ordeal of Shackleton and his crew of twenty-seven men.”

“For ten months the ice-moored Endurance drifted northwest before it was finally crushed between two ice floes. With no options left, Shackleton and a skeleton crew attempted a near-impossible journey over 850 miles of the South Atlantic’s heaviest seas to the closest outpost of civilization. Their survival, and the survival of the men they left behind, depended on their small lifeboat successfully finding the island of South Georgia—a tiny dot of land in a vast and hostile ocean.”

Did Shackleton succeed? Yes and no. He certainly did not achieve the mission objective but managed somehow to keep each man going to make it home. I’ve read a lot of books about survival. Not many come close to this. I think if he would have made it to the South Pole, the story certainly would still be good. But, would we recognize in the same way the pain it took to achieve such a task? I don’t think so. I believe we read about his voyage of survival with curiosity and wonder at how he and his men managed to be creative to stay alive for almost two years.

The story of Endurance is a reminder to all of us that there is great purpose in the journey regardless of the outcome. That is why we must finish the race.

I believe that God sees each of us as a biography being written. After all, He sees us for who we really are—imperfect people who need grace and an urging by His Holy Spirit to act. Thus, He sends us on a journey called life. Some of us have a harder journey than others. But, we are all meant to seek it for God’s greater glory, and that means taking steps beyond what we could ever have imagined.