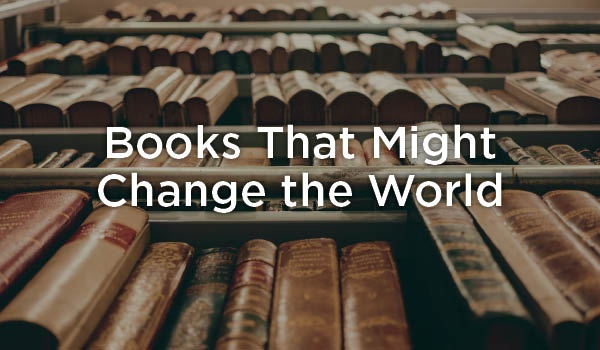 One of my favourite books as a child (and I still have it) was a wonderful kids’ atlas that also explained a lot about humans and physical geography. That might not sound gripping, but it introduced my young eyes to landscapes and cultures across the world. I began to realize there was a whole world out there and that it was different from the sleepy, leafy neighbourhood I grew up in. It began a lifelong fascination with other cultures and places. I used to imagine traipsing off down the street and arriving in Africa or someplace just as unfamiliar to my childhood frame of reference. It has only been some time into adult life that I have had the opportunity to travel widely, and it still feels like an extraordinary privilege. Each time I arrive in a new part of the world, the inner boy in me is giddy with excitement.

One book that helped me return to reading, or help sustain me as a reader, was Hudson Taylor: A Man In Christ

I’ve always been drawn to Christian biography. One of the first jobs I had in Christian ministry was working for the mission organization OMF International, and so I was quickly encouraged to read about the life of its founder, J. Hudson Taylor (who originally founded it as the China Inland Mission). Hudson Taylor opened my eyes not just to the burden of global missions, but to the important principle of cultural flexibility for the sake of advancing the truth. He was one of the first of his time to adopt local dress and language in order to remove unnecessary barriers to the gospel. Roger Steer’s Hudson Taylor: A Man In Christ captures both the physical and spiritual adventures that this led to. It is a book I often return to as I know it will rekindle fire within.

I know it is a cliché, but it has to be Mere Christianity by C S Lewis. This was actually the first book I ever read as a Christian and it proved to be so formative. I have come back to it several times since and reread it (rare for me to reread a book). It is as though it is my oldest Christian friend. Lewis seems to capture the rationale of the gospel like no one else. The book simply oozes grace. Lewis somehow sets out the Christian life with unassailable logic and yet does so poetically. It is no surprise that it remain pivotal to so many even after these many decades since it was first published.

Tim Keller is deservedly one of the most popular Christian authors today. Although this title is not his best known or most read, I think it is probably his best and the book which sums up his most unique contribution to the church. Keller has huge respect for the sceptics that live all around us, and this book does as good a job as any of showing how the secular worldview, while attractive, ultimately doesn’t and can’t deliver what it promises. Instead it is the gospel that clarifies, explains, and fulfils our greatest longings. Keller is sympathetic in tone, but utterly meticulous in his execution. It is apologetics at its best. Keller has such a unique way of showing how to understand and critique the thought world of those who are avoiding the Christian faith. I need to go through it again.

This book was first recommended to me soon after I became a Christian and started to sense a call into local church ministry. It was just what I needed. It helped me think through issues of assurance and guidance, as well as some of the issues that come as you start to head toward seminary. It also has some terrific insights into what has shaped the evangelical movement in the west in the past 50 years or so. The book is made up of letters from a fictional seminary professor to a younger believer over the course of a few decades. There’s nothing out there quite like it. I think it is out of print now, but it is my top recommendation for anyone heading into seminary. It deserves to be back in print and read and cherished by the widest Christian readership.

Sam Allberry is an apologist for Ravi Zacharias International Ministries, and a consulting editor for The Gospel Coalition. His can never have enough bookcases and takes particular care over his C S Lewis collection.